Stuck at Home? Read Our Post: The Ultimate Guide for Self-Isolating Musicians and Producers
Home » The Theremin (Best Ones, How They’re Played, Common Questions)
InstrumentsTech

The Theremin (Best Ones, How They’re Played, Common Questions)

You may know it for its very unique timbre. You may have watched The Big Bang Theory character Sheldon Cooper perform a weird version of Nobody Knows The Trouble I’ve Seen on it.

The theremin is a very interesting and somewhat mysterious instrument, both for the sound it emits and the method used to play it.

Nowadays, more and more people have gotten to know this peculiar instrument, once largely unfamiliar to the general public.

With the popularity of online platforms such as YouTube, where niches manage to thrive and sometimes become mainstream, the theremin is experiencing an unexpected wave of notoriety.

However, its functionality is still a big mystery to many. How did it originate? How can I buy one? How is it played? In what contexts is it used?

Before we get into the answering those questions, check out this great video below that demonstrates it being played by a very skilled player:

How Much Does a Theremin Cost?

You can buy relatively cheap Theremins, but if you want to get a new and good quality one, you’re looking at least between the $300-500 price range.

If you have a lower budget, you should check out are there are any used theremins for sale. We would recommend that you get a higher-end used theremin, rather than getting a low quality budget one. 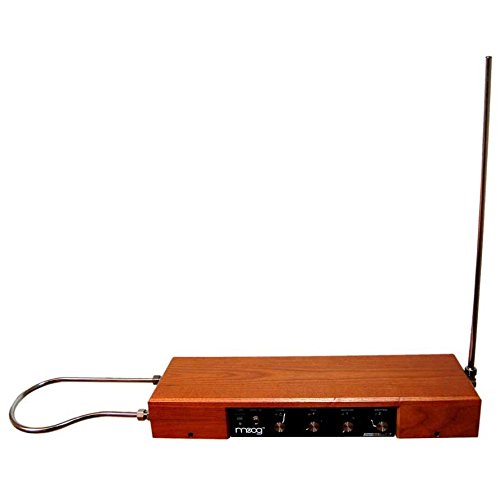 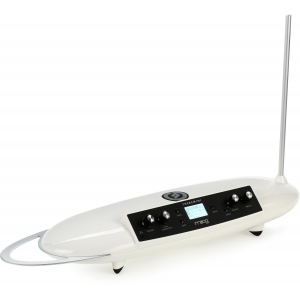 How Do You Play the Theremin?

Where’s the fretboard?! The first thing you’ll notice in a theremin is the complete absence of anything slightly resembling either a keyboard or a fretboard. There are no keys nor frets, but just two metal antennas, that make this instrument more similar to a radio or a modem rather than a musical instrument.

You’ll just need to get close to the antennas, however, to hear the magic happen.

The concept behind the instrument is fascinating: you play the theremin with your body and, in particular, with your hands and arms.

Your fingers, wrists, palms become the frets and the keys you need to emit a specific pitch.

However, the sound emission happens without any physical contact between the player and the instrument.

How Does the Theremin Work?

The antennas sense the movements of the hands, transforming them into electric signals. These signals then get amplified and sent to a speaker.

The closer you get to the first antenna, the higher the note.

The closer you get to the second antenna, the louder the note.

Being able to control pitch and amplitude through fine movements of your hands, rather than simply hitting a key or plucking a string, gives the musician a wide range of expressive solutions.

For this reason, some musicians tend to prefer the real instrument rather than the theremin sounds available on many contemporary synthesizers.

Is a Theremin Hard to Play?

As with any instrument, it’s difficult to play at the start, but you can become very skilled at playing it. Even slight changes in your hand position can make quite a difference to the pitch or loudness, but you soon start to get the feel of playing it.

Does a Theremin Need an Amp?

Some Theremins contain built-in speakers, others do not.

Built-in speakers are great for practicing, but it’s great to have an amp when playing it with other musicians or for live performances.

Theremins often have 1/4″ output jacks (the size of guitar and instrument cables), cables of these sizes can generally be connected directly to amps and mixers.

The theremin has a very unique sound, often described as eerie, spooky, ethereal, or alien. Due to this particular timbre, it is sometimes featured as part of the soundtrack to sci-fi or horror movies.

However, high-end theremins have the option of switching among different timbres. A theremin can indeed sound spooky and ghostly, but it can also be as soft as a cello.

The theremin is monophonic, so it is perfect as part of an ensemble with more traditional instruments, such as the piano, the guitar, or even whole orchestras.

When playing solo, thereminists might enrich their performances through the use of effects, such as delay, reverb, and harmonizer, creating an interesting palette of expressive options.

Where did the Theremin Come From?

The theremin is often considered one of the first electronic instruments.

It was patented in the United States in 1928 by its inventor, the Russian physicist Lev Sergeyevich Termen, also known as Léon Theremin, who had developed a prototype eight years before, as part of a research, funded by the Soviet government, in the field of proximity sensors.

Towards the end of the 1930s, Léon Theremin suddenly disappeared and went back to the United States only in 1991. According to his biographies, the physicist was reprimanded by the Soviet regime for exporting a Russian invention. Some people believe he was forced to Siberia.

During his absence, however, the instruments started gaining popularity in the United States, especially in the field of classical music. The popular violinist Clara Rockmore contributed to its success, often playing the theremin during her concerts.

During the 1950s, however, the theremin started to be forgotten as new and more versatile electronic instruments started to appear on the market. But a niche of enthusiasts kept playing that strange musical device. Among them, Robert Moog, the inventor of the synthesizer, started producing theremin kits that players could assembly once purchased.

The theremin is now regaining popularity, especially among classical musicians.

Carolina Eyck and Pamelia Kurstin are among the most famous thereminists today and the are actively improving either the instrument or the playing technique.

Pamelia Kurstin, for example, worked with Robert Moog at the Etherwave Pro Theremin, being the first musician to test it. She also developed an innovative playing technique inspired by the jazz standard walking bass approach.

Carolina Eyck, on the other hand, helped spread the popularity of the instrument across the world, touring with many orchestras and ensembles from different countries. She also developed a system to play scales faster and more easily, with what she called the eight finger position.

Theremins, either the original instrument or some modified versions of it, were also used by some rock artists to obtain a different sound.

Beach Boys, for example, used an Electro-Theremin in their 1966 single Good Vibrations. Led Zeppelin and Jimmy page, in particular, used a simpler version of the theremin on stage. Brian Jones used a theremin in the Rolling Stones’ 1967 album Between the Buttons.

In conclusion, no matter how spooky this instrument sounds or how weird it feels to play it: it has proved it can resist time and fashions. It is versatile, it fits different styles and genres of music, and it is a stimulating challenge for musicians to approach it.

The technological evolution yet to come will only enrich and evolve such a peculiar and exciting instrument.

Why Do Musicians Wear and Take Out Their Earpieces?