The roles of DJ and Music Producer are very different. A producer creates tracks, while a DJ usually plays full tracks to audiences. However, the lines can get blurred and people can do both to different degrees, which is what we’re going to explain this article.

In this article we’re going to explain:

The Difference Between a Music Producer and a DJ

A Music Producer creates or remixes full music tracks. A DJ usually plays and mixes released tracks to an audience. Many artists play the role of both.

DJs can help transform the tracks from other artists according to the vibe and mood of the environment, whereas producers are the original creators or remixers of the tracks. 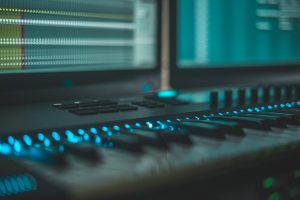 A music producer generally utilizes the facilities of Digital Audio Workstation (DAW) software, music plugins and instruments to create tracks in their studio. Producers create their own original tracks, remix songs from other artists, or produce tracks for other artists.

Ultimately the process should end with a polished record that is ready for public distribution.

Music production is a skilled process that is both an art and a science that requires a lot of dedication. 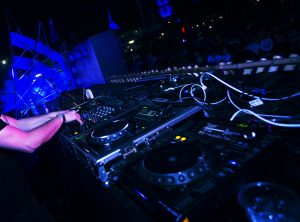 A ‘Disk Jockey’ – Usually plays already released tracks to an audience, and transitions the tracks together to keep the audience engaged

It’s usually a DJs job to create a well-transitioned playlist in a real-time mix that keeps the audience engaged. DJs often play other people’s music, but music producers may also play DJ sets of exclusively their own music.

DJs usually deal with the tracks that are already released and can mix between tracks in real-time for the audience adding the right punch, grooves & beats within the music.

DJs often use music gear such as CDJs or the more old-school approach of using turn-tables and vinyl records.

It’s easy to learn how to be a DJ, but it can be difficult to become a really good one. Being a great DJ involves having full control of your setup, as well as being able to expertly read your crowd and adapt your set to it.

Some producers play DJ sets using classic DJ equipment (such as CDJs or vinyl) while mixing and adding some effects to their tracks.

The music software Ableton Live can be used to create, control and mix completely new electronic music tracks live. The performer will often use MIDI controllers in different forms (e.g. keyboards, drum pads, and launch pads) to make it much easier and to add a more visual element to their performances.

Live performance of electronic music completely from scratch can be quite a difficult task (and may not be practical for solo performers). Many producers use a ‘middle ground’ approach of using pre-recorded samples, backing tracks, mixing them together and playing an instrument or singing on top of this.

Note: The list of DJs, Producers, etc, in this article is not meant to serve as the definitive list of the best artists in any category. They are merely to serve as some good examples of each.

The music industry is afloat with many artists who produce their music and also perform as DJ. This category is the best of both worlds, as they are known and recognized worldwide for their musical endeavors and for turning up the heat with their DJ-ing skills.

The famous producer-DJ duo, Chainsmokers, are known for their back-to-back no.1 chart-topping tracks like Closer, Paris and Something Just like This. Initially influenced by EDM, Chainsmokers are now dedicated to creating music that nullifies the distinction & blurs the boundaries of EDM, pop & hip hop genres.

The fiery flame of dance music, Zedd is a DJ, Songwriter & Producer who has given mind-blowing and foot-tapping tracks in the last decade. The artist has collaborated with the likes of Selena Gomez, Ariana Grande and Lady Gaga to name a few and his music has evolved into a perfect amalgamation of EDM, pop & inferences from classical music.

The DJ & record producer is known for electronic music that is heavily embedded in progressive house, techno and bass to some extent. However, Deadmau5 is known for creating sounds that have an element of grit devoid of any genre. He is a powerhouse of talent on-stage & in the studio. Deadmau5 has also contributed to the development of the plugins, such as Cthulhu.

Kasra spent 16 years honing his craft of DJing. He is an international sensation with steady career growth. The popping drums and bass sequences contribute to his signature style in remixes.

Although Kasra now produces music, he initially built is career on DJing only.

Music Producers; these are the guys who are often decision-makers, arrangers, songwriters, and many other roles combined into one. They are responsible for creating engaging tracks and albums and provide significant overall direction in the music-making process. Music producers are often deemed as unsung heroes of released music.

The six-times Grammy award-winning music producer & songwriter has contributed a great deal in the country music genre and collaborated with Lady Gaga for the musical film, a star is born soundtrack.

Cobb’s work portfolio is not only limited to the country genre but his true fascination lies with rock & roll produced some great music for Rival Sons album.

He is one of those producers who do not leave their fingerprints on each project in the pursuit of cohesion distinct to them. Rather he believes in producing music that comes organically and offers uniqueness.

Max Martin is the pop music industry’s best-kept secret. Max Martin has become somewhat a legend in music industry, having worked with almost every impactful artist of the 90s & 2000s,.

Martin has produced Britney Spears’s most cult songs, and the man is still producing chart-topping music for today’s most talked-about artists of the industry.

So now you know the real differences between music producers and DJs. You may want to play great DJ mixes to live audiences, or perhaps you prefer to create fresh tracks from scratch as a record producer. However, the lines can be blurred. Artists love to push the boundaries when it comes to music; therefore, many dabble in DJing and music production.

Working in either of these fields requires a lot of work and dedication, but they can be incredibly rewarding, as we have pointed out through all of the success stories above.