Stuck at Home? Read Our Post: The Ultimate Guide for Self-Isolating Musicians and Producers
Home » The Otamatone Musical Instrument – All Your Questions Answered!
Instruments

The Otamatone Musical Instrument – All Your Questions Answered!

The Otamatone is an interesting musical synth made by the Japanese company CUBE. If you feel like musical instruments have gotten too boring or monotonous, then check out something truly… different!

I assume this was named as a play on the word ‘automaton’, a mechanical device in imitation of a human being, but I’ve been wrong in the past!

They are designed to look like a musical note with a cute or strange-looking cartoon head at the bottom. It could fill your heart with warmth or it could be the source of your nightmares. For you, I hope it won’t be the latter.

Before we continue, check out the video below which goes through 8 songs being played on the Otamatone!

How Do You Play the Otamatone

You move the fingers of one hand up and down the front staff of the Otamatone. The other hand can be used to open and close the mouth, which gives it a wah-wah type effect.

This is not a standard musical instrument! It’s a strange one, but strange can be cool!

There is a volume knob at the back to control the sound. There is also an audio output that you could use to route the audio to an amp, external effect pedal, etc!

You can change Octaves at the back, so you can get high, medium or low pitched sounds from them. 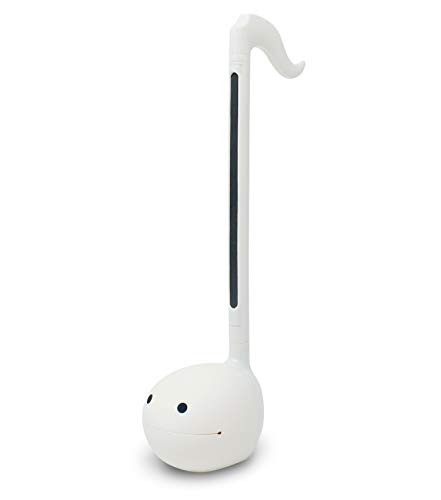 Why You Should Get an Otamatone

If you want something very different, a conversation starter and good fun, then maybe you could get an otamatone.

It’s super strange. I’m not sure how many times I’ve written the word strange in this article (there’s another one!), but it’s very interesting, and I think it would be a great quirky little device to add to any studio.

If you are looking to invest in serious music gear than maybe you should save your bucks for something else.

Though it looks like at least one person might be making money from an Otamatone (other than the people selling it). The Youtuber TheRealSullyG has MILLIONs of views across a bunch of different, well-produced Otamatone covers!

Is the Otamatone Hard to Play

As explained in this video below, this trained Cellist has explained that it’s quite a difficult instrument to play!

Is the Otamatone the Weirdest Instrument in the World?

It’s pretty weird, but it’s probably not the weirdest instrument ever made. I think the theremin is quite a bit stranger (check out our post about that, it’s spooky!).

Though everything doesn’t need to be a competition, the otamatone is still a weird instrument!

Is the Otamatone a Real Instrument?

It’s a synth that can be played with your hands and it has an audio output. So, therefore, it is an electronic musical instrument.

It’s certainly a less ‘pure’ instrument than a piano, violin, or guitar. Some people would laugh at the idea of an Otamatone being called a musical instrument, others that are involved in electronic music gear would define almost anything that can produce a pitch as an instrument.

The debate whether it’s a real instrument is one of those arguments that could go on until the end of time. I’ve thought about it for a while and I am none the wiser.

Is the Otamatone a Toy?

Yes, it is promoted by the manufacturer as a musical toy!

So that’s all of your questions answered about the Otamatone. Perhaps you had no questions about it at all. Either way, I hope you feel enlightened that you now know something such as this exists in our world.

Do you own an Otamatone? Has it changed your life? Write a comment below!

The Differences Between Lap Steel Guitar and Dobro