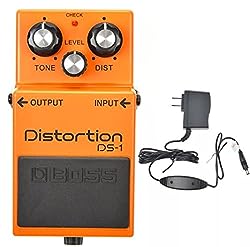 For most guitar players, this small orange box seems to have been around forever. Practically, it’s not far away from the truth, considering that the original Boss DS-1 came more than four decades ago. It comes from one of the most renowned companies when it is guitar effects in question, and hasn’t changed much all these years. Years of use made this pedal legendary. It is probably the most recognizable distortion pedal, known for its good tone, simplicity of use and superior durability.

Through all these years, it has been used by numerous players, including guitar legends like Steve Vai, Mike Stern, Joe Satriani, Dough Aldrich, John Frusciante and others. Despite such an amazing reputation, it remained a very cheap piece of  the equipment, which is probably the best thing about it. Nowadays, when the market is overflowed with various kinds of quality products, many would wonder if this simple pedal  might still  be a good competitor. So, let’s find out.

Although this pedal definitely doesn’t need any special introduction, let’s go through a brief history. The pedal was introduced in 1978 and has been  the first distortion pedal from Boss. Just like all pedals from this manufacturer, it was produced in Japan first. Production moved to Taiwan in 1990 or something like that, so if you’re want to buy a used one, original-sounding version of this pedal, my suggestion would be to find a piece that was made in the 80’s. Don’t worry, these units are so sturdy that can last for ages.

Another important thing happened in the early 2000s, I think, when Boss officially became a part of the Roland Corporation. Though I can’t assert, it looks like the quality started to drop since then. Still, this is a common thing among all companies in these days when manufacturers suffer from a thing that I like to call profit disease.

Anyway, let’s starts with some basic information about the Boss DS-1.

The Boss DS-1 is a rather simple pedal. It features a very compact size, something like two packs of cigarettes. The look of the pedal hasn’t changed over these years, so it still comes in the famous orange color. Like all Boss pedals, it comes with a heavy-duty housing that can last for ages. When it comes to controls, there are only three control pots. Those are Tone, Dist, and Level. With the first one, you set the darkness/brightness of your tone. This is a pretty common control and can be found on every guitar, guitar effect or amp, so it definitely isn’t a thing that can confuse you or make a problem when choosing your desired sound color. As its name says, the second one lets you distort a clean, natural sound of an amp. Finally, a Level pot is a volume control. It definitely can’t be simpler than that, so you will get used on this pedal in a matter of seconds. The biggest part of the pedal is actually an on/off switch, which is designed in the company’s traditional manner and works very smooth. Of course, there’s one in and one out, so the pedal can easily find its place in your chain.

We came to the most important part of this review – sound. This pedal works on a very simple principle. It consists of an operational amp, or simply op-amp, which is pretty much of the same size as a common electronic transistor. Its tone range is extremely wide and goes from mild, cleanish tones to extremely distorted sound. It is an extremely versatile pedal, which in the company’s lineup stands somewhere in the middle.

During these 40 years of production, we have seen several changes of the op-amp. Original models used Toshiba TA7136AP, which was replaced by Rohm BA728N in 1994. The second change occurred in 2000 when the company started installing Mitsubishi M5223AL. Finally, new DS-1 Pedals use an NJM3404AL op-amp. Despite these op-amp changes, the base character has remained the same, so even the newest pedals feature recognizable sound. Those pedants would say that models from the 80’s sound best. When I was comparing pedals from different eras, I heard slight differences, but I can’s say that new models sound bad. It is just a little bit different, nothing more than that.

So, how does Boss DS-1 actually sound?

When we compare all overdrive/distortion pedals from Boss, this one stands somewhere in the middle. Thanks to quality analog pots, you can cover a pretty wide range of tones. Speaking of genres, this one is definitely best for classic rock and old-school metal sounds. Some mid-level distortion gives best results when you get a recognizably warm tone with a lot of character. In my opinion, this pedal is primarily for soloing, mainly because of its great combination of warm and fat tones. Rhythm parts sound decent as well thanks to the pedal’s warm character.

You can use the pedal in many ways. First of all, you can distort a clean channel of your amp. This is a primary function of the pedal and it is definitely its zone of comfort. Also, it would work great with the drive channel, even to boost your sound for solos and similar things. Finally, it works in combination with other distortion pedals and doesn’t affect the sound of an amp when turned off.

If you prefer low-gain, bluesy sounds, this pedal seems ok, but there are many better choices on the market. Even Boss offers a variety of overdrive pedals, including some legendary products like OD-3 or BD-2.

On the other side, some ultra-high-gain tones sound a little bit defective and crude. For metalheads, an upgraded DS-2 Turbo Distortion would be a much better choice, not to mention MD-2 Metal Zone and similar monsters.

The BOSS DS-1 definitely sounds like a perfect one to start building your pedalboard for. However, you should know that this pedal doesn’t work very well with solid state amps. So, before you start building a pedalboard, consider getting a quality tube amp.

This short review should give us  a basic picture of what DS-1 actually is. Considering all of its qualities, this pedal is definitely worth buying. With such age and reputation, you definitely can’t go wrong with this one. It delivers great tone, in a pretty wide range. So, it’s no wonder that the pedal is used by such a huge number of guitar players. I don’t have any stats, but I’m pretty sure this is the most popular distortion pedal in the world.

Of course, there are many newer, better-sounding pedals in these days, but I still think that the Boss DS-1 is a great choice. First of all, its sound is still a reference, when it comes to distortion sound. After all, many famous guitar players used or still use this small unit. Second, it is very cheap. Considering its reputation, it seems extremely affordable, which is another great thing about this pedal. Third, Boss is well-known for is heavy-duty housings. All products from this company feature amazing durability that promises years of use. It seems almost impossible to broke this pedal.

Another thing I would like to say is that you don’t necessarily have to buy a new one. Buying a used one seems like a good way to save some money. Moreover, if you can find a piece that was made in the 90s or even 80s, you will get the original sound, which many consider to be much better compared to one that characterizes new pedals.

All in all, there is no good reason why you shouldn’t try this pedal.

VST Plugins in Ableton Live (How to Install, Free VSTs for Ableton)